Built for Trenitalia, the battery hybrid train will reduce carbon emissions and fuel consumption by 50% and can arrive at and depart from stations completely under battery power.

The train will be the first ever ‘tri-mode’ (using a battery, electric, and diesel power) fleet to enter passenger service in Europe, later this year. RAILMARKET.com was at its presentation.

The ‘tri-mode’ Blues train uses electrified routes pantographs to draw power from the overhead lines. However, when it moves to non-electrified lines, usually smaller regional routes, a combination of battery and diesel power takes over. When it is near a station, the batteries power the train completely, eliminating emissions including harmful NOx and reducing noise pollution. The battery can recharge while the train is in operation, both in diesel and electric mode.

The fleet’s top speed is 160km/h. Yet, crucially the extra power offered by the on-board batteries means the Blues train’s acceleration and performance is superior to existing diesel trains, allowing it to offer reduced journey times for passengers.

The Blues train is equipped with innovative European Rail Traffic Management System (ERTMS) digital signalling, which has up until now only been used on high speed trains. This system supports the reduction of the railway’s energy and emissions footprint by regulating the speed, acceleration and braking of trains. ERTMS also boosts safety by enabling the automatic activation of train safety functions, including emergency braking in case of danger or if trains exceed the track’s line speed. ERTMS is recognised as the European rail standard, making the Blues Train highly interoperable and suitable for operation across Europe. 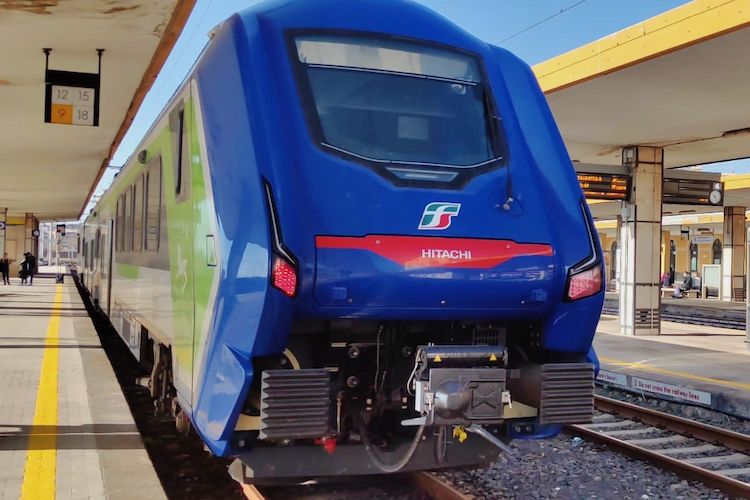 Hitachi Rail's Blue train has entered into operation in Sicily

The new train, designed for Trenitalia, is the first ever…