More than one million tonnes of construction materials were transported by rail to the high-speed rail’s work sites across Buckinghamshire, taking the equivalent of 100,096 HGV journeys off local roads.

One of the important aims of the project for HS2 is to design and built the most sustainable high-speed rail network in the world, reduce carbon emissions and help the UK combat climate change. In keeping with these ambitions, HS2 has announced its success, with more than one million tonnes of construction materials have been delivered by rail, equivalent to 100 096 truck journeys.

The huge milestone was achieved over eighteen months, with 583 trains delivering aggregate to three locations around Calvert and Aylesbury. Transporting this material by rail instead of by road is estimated to have saved 11,399 tonnes of co2 emissions.

“We are serious about reducing the impact of construction on the local community and every freight train delivering material to site is the equivalent of around 70 trucks that would otherwise be on local roads,” said Rohan Perin, HS2 Project Client. “HS2 will offer zero carbon journey for passengers, but it’s also important that we drive down the amount of embedded carbon in construction. We’ve been working closely with Network Rail, EKFB and the Freight Operators for a number of years to make deliveries by rail possible and it’s great to see that our freight trains have now passed the one million tonne mark.”

The first rail freight railhead at Calvert was opened in late 2020 with only 180 trains scheduled to transport aggregates from Hanson quarries in the west of England. Due to the success of the project, new railheads have been established near Calvert and Aylesbury, to allow a massive increase in the amount of material delivered by rail. Across the whole HS2 project, 15,000 freight trains are set to haul 10 million tonnes of aggregate to construction sites – taking the equivalent of 1.5 million HGVs off the UK’s roads.

The main contractor for the construction works of the project HS2 is EKFB – a team made up of Eiffage, Kier, Ferrovial Construction, and Bam Nuttall. The freight trains were operated by DB Cargo and Hanson and coordinated by rail freight specialists, Fishbone.

“The EKFB Logistics Team always strives to optimise deliveries where possible and the Material by Rail strategy is central to that. With the support of our partners, Fishbone Solutions, Hanson, DB Cargo, RFS and Mendip Rail, this strategy has allowed EKFB to remove a substantial number of vehicles from the roads adjacent to the construction sites and critically reduce the impacts on local communities, but also transform how we manage logistics on this project”, said Chris Barton, Head of EKFB Logistics and Security.

HS2 is the UK's new high-speed rail line being built from London to the North West. The aim of the HS2 project is to connect Scotland's largest cities with Manchester, Birmingham, and London. It is the largest infrastructure project in Europe and the most important economic and social regeneration project in decades. The construction of HS2 is now well underway across Buckinghamshire, with the aggregate used for early works and temporary site access roads. 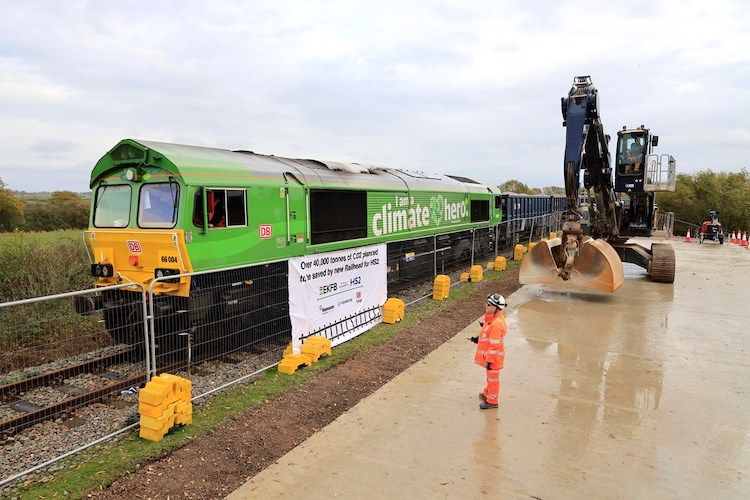 The new facility is expected to take the equivalent of 300…